All electrical lighting questions in here please. Including outside lighting and light switch / dimmer questions.

Hi,
I hope someone can help with this one. My daughter has just moved into a new house. I explored one of the ceiling roses today with a view to replacing the existing fitting with a simple pendant. What I discovered was pretty ropey and not something I had seen before. I took a photo and replaced the fitting without disturbing any of the wiring. The live wire was connected to the live of the kight fitting, but three black wires were twisted together and squeezed into one terminal with a lot of exposed metal on view. Not nice. A photo is attached.
I am trying to confirm a safe way to connect up the new pendant, obviously without crowding 3 wires into one. Is it simply a case of a connector block that can accomodate 4 wires, 3 coming in from the ceiling and the neutral of the pendant or is there something more profoundly wrong here? Ive succesfully connected up plenty of light fittings before but never seen this arrangement.

I used one of these 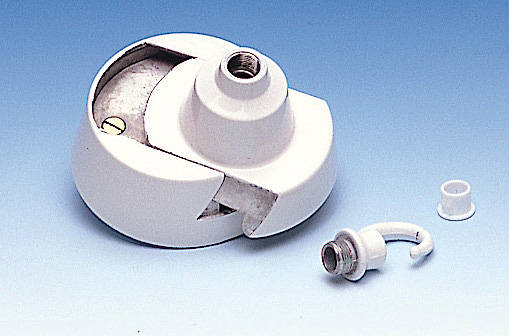 not cheap, but all fitted with no weight and once fitted so easy to remove light for cleaning. It looks to me however pre-1966? In 1966 the rules changed, before that date it was common to have no earth wire to the lights, there is nothing to stop you continuing to use the system with no earth, but it means no metal light fittings or switches. And caps over the light switch screws.

Back in 1954 when my dads house was built, light switch back boxes were wood, and the ceiling rose only had line and neutral, as metal fittings started to become popular so the rules changed.

I would suggest you look at

It is called a wago connector. The orange bits are levers, you lift up one, push your wire in, push the lever down the wires is secure for ever more, repeat for other 3 wires.

You might want to buy a box of them for future use.
Available from the usual places. (Screwfix, cpc, toolstation, TLC)

And yes, the wiring is normal, but it does look old and has no earth.

Fret not, a forum is a collection of opinions. Above, are mine.


Working on anything electrical? have you got a multi meter? why not? Would you hit a nail with a shoe?

If gloom had a voice, it would be me.

Thanks Ericmark. Looks like the wiring hasnt been renewed since the 1960s when I think it was built. That gives me a different concern and I will certainly heed the advice about avoiding metal light fittings.

i second se's comment about the wagos, i've swapped to them for all wiring work which requires the old chocolate blocks, not only faster, but much more professional looking and better quality connections.
Top

If the wires are PVC then likely still OK, but if rubber likely re-wire is required, I had to get my late mothers house done, what I found was the wiring was not good enough to support RCD protection and my mother was starting to do daft things like she saw a neon on an extension lead and thought it was on fire so put it in a bucket of water, so I decided there was a real need for RCD protection. It was a very basic rewire, seem to remember cost around £2500 in North Wales.

It is recommended when a new occupant takes over a home an electrical installation condition report (EICR) is done, however these reports are now law for rented property and it seems they have gone a little OTT with them, however getting an electrician to cast an eye on the installation does make sense.

The problem is things have changed over the years, my dad was proud his house built 1954 had 6 sockets, my grand dads only had 2, but few people can today live with 6 sockets, so nearly every house has had some alterations done, and often not done very well. Also rules today are not retrospective but they do mean often you can't now add things without a lot of expense, it is the "just jobs" I just want another socket here. But to fit it because old system which is no longer permitted, it needs to have special sockets, and special cable, with mothers house before rewire to comply with current regs at the time to do the kitchen electrics a steel wired armoured cable had to be run outside the house and kitchen had it's own consumer unit.

So knowing what can be done or not done is important, the new kitchen in mothers case was essential as she had become an amputee, but until then kitchen had never been altered mainly due to state of the electrics.
Top

All good advice, thanks once again. I'll check out the wiring vis rubber / pvc and get an electrician in to confirm that the overall house electricity is safe. Not something to take chances on!

Pictures suggest that the wiring has PVC insulation so it should be ok. However there are no obvious signs of earth conductors, and if there are the question would be are the conductors bonded throughout the system , this is especially relevant if the new rose was metallic or indeed the light fitting proposed.

Screw terminal blocks remain a good system of termination in the right location , I have multiple down lights in bathrooms and fans all to interconnect so I bring all of the cables back to a IP rated plastic box in the loft , terminate and label using terminal blocks. You don’t want any type of terminal laying around in a loft or underfloor space subject to dust, bugs , spiders and debris, just nice to keep terminals of whatever type all clean and safe.
Top

OK I am no sparks, but do you have access above a nice pukka junction box fixed to the joist with a single cable to your new fitting seems the logical way to go.
Top

That's where wagos win over a jb.
make the connections below the ceiling, put into a wago box, poke box into ceiling.
Fret not, a forum is a collection of opinions. Above, are mine.


Working on anything electrical? have you got a multi meter? why not? Would you hit a nail with a shoe?

If gloom had a voice, it would be me.

Well the wagos are in the bag so lets see how that goes!